Perhaps the most useful, but seldom-noticed benefit of a structured log is having the first-class notion of an event type.

When analyzing a traditional text-based log, there’s no concrete relationship between the messages:

From a tooling perspective, each might as well be a unique block of arbitrary text. A lot of work’s required using tools like logstash to go further than that.

In a structured log from Serilog, the message template passed to the logging function is preserved along with the event. Since the first two come from the template:

While the third comes from:

We can use this information to unambiguously find or exclude either kind of event. It’s so simple and straightforward it is mind-boggling not to see this technique used everywhere!

Working with message templates is verbose though, so Seq produces a 32-bit (Murmur) hash of the message template that can be referred to using hex literals, for example Pre-discount tax total calculated at {TaxAmount} -> $A26D9943, while Customer paid using {PaymentMethod} -> $4A310040.

Seq calls this the hash the “event type”. Here’s Seq selecting all events of the first type on my test machine:

This was for me, actually, one of the core reasons to justify spending a bunch of time on Serilog and Seq – application logs no longer seemed like a hack or a crutch: working with “real” events that have an actual type elevates them to something that can be usefully manipulated and programmed against.

So, what else can you do with a log imbued with first-class event types?

All seems pretty good – nothing out of the ordinary. Well, at least in the last minute or two…?! It’s really hard looking at a small window on a large event stream to make any proactive decisions, because by definition, the interesting events are a minority.

A compromise I use often is to create a view just for “Warnings and Errors” – unfortunately, on a large stream, this view’s not so useful either: the same kinds of things show up again and again. Diligently excluding uninteresting events by type can help here, but that’s a very manual process and isn’t much fun in practice.

Seq 1.4 introduces some simple local storage for hosted apps, so as a test case for that I’ve spiked a different approach to finding “interesting” events. Using some app-local storage, why not keep track of which event types we’ve seen before, and emit an event whenever something “new” happens?

For example, in the case:

We’d detect the event “The value is 0” and then ignore further events with this event type (for values 1, 2, …). By keeping tabs on new events I might spot something unusual, or, I might just decide to incorporate the new event type into a counter or chart.

There’s a broader notion of “interestingness” than this of course, but for a simple example it’s still quite powerful.

Here’s a new view on the same server shown earlier:

Rather than list the events themselves, we see the first occurrence of each event type and a hyperlink to view the event itself (shown in the expanded property view).

This view is generated by a new Seq app “First of Type”:

You can see the complete implementation with a few small improvements on GitHub, and install it into the Seq 1.4.4-pre build or later using the ID Seq.App.FirstOfType.

Once you’ve installed the app into your Seq server, “start a new instance of the app” that automatically accepts events, and click through to see the stream generated: 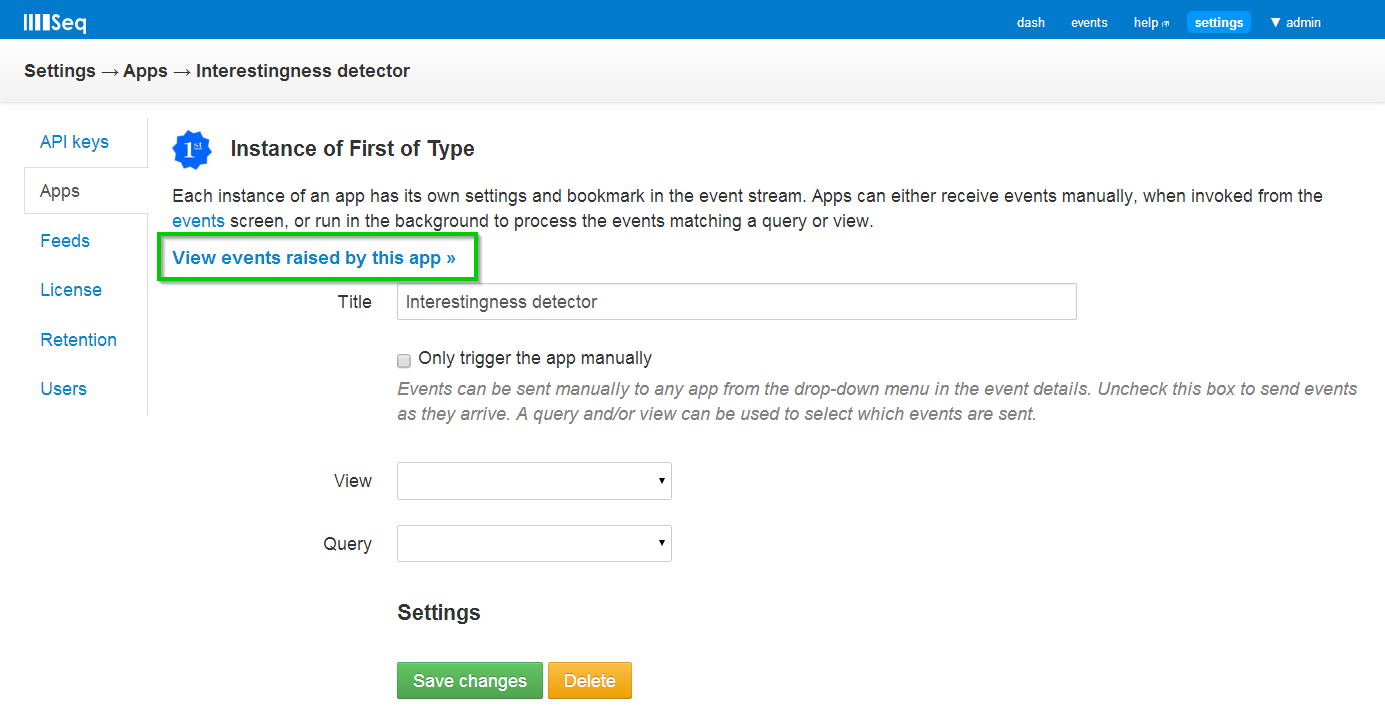 (You may need to wait for 30 seconds before the new app starts getting events: Seq uses a short buffer to sort events on arrival so that they are processed in timestamp-order).

So how’s it done?

The new feature that enables this is the StoragePath property, which simply provides a unique filesystem folder for the running app instance:

To keep runtime performance of the app and the size of the state file constant, we use a Bloom filter to track which event types we’ve seen:

The spike of the app as currently written uses a slightly smaller filter, and fewer hashes than desirable – if anyone’s interested in “doing the math” and setting up a better filter, PRs are accepted for this!

The language of the Bloom filter’s API – “may contain”, stresses that an approximation is being used:

This does mean that new types can be missed. Tuning the filter can bring this down to a negligible percentage.

We don’t have to do anything special to get evt.Id hyperlinked in the Seq UI – the UI’s smart enough to detect this.

The rest of the app simply maintains the state file as event types are seen.

I’ve often written log messages thinking “well, if I ever see this message I’ll know there’s a bug” - using this app there’s actually the possibility that I might notice a needle in the haystack!

It’s not a big leap from here to imagine a similar app that could track property values on an event type, either testing for uniqueness or observing variance from an historical range. Having local storage within Seq apps opens up a lot of possibilities I hadn’t given much thought to in the past. Happy hacking! :)