The type-to-type mapping of an IoC container obscures the fact that in reality, IoC configuration describes object graphs.

Perhaps this is why it is sometimes difficult to reason about how component instances will come together at runtime?

The problem dealt with in this article fits this description – a simple object graph that is unintuitive to build with a typical container.

Back to the Gang of Four…

The classic “Gang of Four”-style Adapter pattern ‘adapts the interface of one class to another’. Common scenarios where adapter-like structures appear are, for example:

We’ll use a fairly broad definition of the pattern, in the context of an image editing application.

So… from an IoC perspective, what is interesting about this example?

An application has more than one kind of command. An image editor may have Save, Open and a whole host of other commands:

But, even though all of the command implementations are the different, the widget representing them on the user interface is implemented by the same component.

To bring the example together let’s add an EditorWindow that accepts all of the toolbar buttons as an enumerable dependency.

Our intention here is that for each ICommand in the container, a ToolbarButton will be created to wrap it, and all of these will be passed along to the EditorWindow via the IEnumerable<T> relationship type .

These might be registered with Autofac in the following way:

Yet, there is something wrong. The static structure of our code is correct, but as I lamented earlier, the object graph isn’t what we expect. 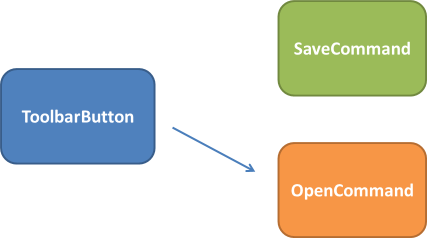 This happens because the container builds object graphs top-down; first it looks for ToolbarButton, then it looks for an ICommand to satisfy its dependencies.

What we’d really like is to create multiple ToolbarButtons, each attached to a different underlying ICommand implementation. 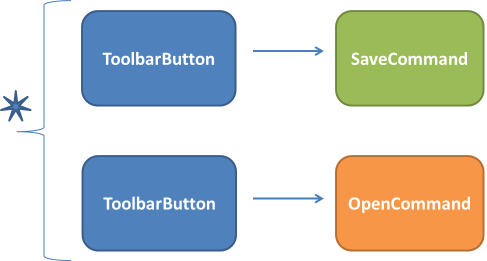 To configure this, Autofac 2.2 essentially lets us switch the composition of ToolbarButton from top-down to bottom-up. First we find all of the ICommand implementations, and then we construct a ToolbarButton for each.

Configuration of the container is the same as before, except we change:

The RegisterAdapter() method takes two types as parameters: the service to adapt from, and the component type to adapt to.

Autowiring isn’t supported for the adapter component in this scenario (yet), so we include a lambda expression describing how the adapter is constructed given one of the adapted instances.

Overloads of RegisterAdapter() exist for passing in parameters and an IComponentContext from which the adapter’s other dependencies can be resolved if necessary.

Aside: @joshuamck suggested an alternative syntax that I’d also considered, along the lines of builder.RegisterType<ToolbarButton>().Adapting<ICommand>(). I think this is more in line with the intent of Autofac’s builder syntax, so depending on how the implementation goes we might see this in the 2.2 release version.

In the example, commands can be given metadata to allow the command name to be displayed on the button.

First the commands are given names:

Then, the name parameter is added to the ToolbarButton constructor and the metadata is consumed:

Adapters, like other relationship types in Autofac, compose nicely with each other as the use of Meta<T> shows.

Lightweight adapters are a nice little helper coming in Autofac 2.2. While these scenarios don’t arise every day, when they do, container support is very convenient.

Download an example (including an Autofac 2.2 preview build) here.