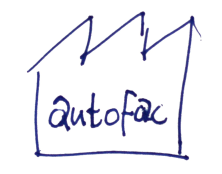 Yes, work on Autofac 2 began a year and a half ago! While work all but stopped while I did other things in Redmond, I’m pleased to say that a beta is finally in sight.

You might be curious just how close is ‘close’: there are six items in the issue tracker that I think need to be addressed:

Most of these are pretty unexciting - minor features, niceties and dependent project updates.

Issue 98, however, has been in the system a while. One of the core improvements in Autofac 2 makes it easier and much more efficient to add support for dynamically-generated component registrations.

As an example, if IFoo is registered, Autofac provides or can be extended to provide:

These can even be composed automatically to give Func<Owned

Under the hood, each extension is a handler that can look at a requested Service, query other available services, and generate a component on-the-fly that is able to fulfill the request.

The handler checks to see if the requested Service is a closed instance of the open generic service type it is watching for (IBar<>). If it is, the handler creates a regular component by closing the generic component type (Bar<> becomes Bar

Now, all is well-and-good if the service is requested by type, as in Resolve

Autofac uses NamedService and TypedService to represent services requested by name and by type respectively. When a component is resolved by name, as in Resolve

And that is at the crux of issue 98. Adding type information to NamedService doesn’t seem like a big deal, but it does touch a lot of APIs and will break some existing apps in potentially confusing ways. It may be that issue 98 is put to the side this time around. Either way a decision has to be reached before Autofac 2 can be released as a beta.

Stay tuned, and have a safe holiday if you’re lucky enough to be taking one!